Every year, Stages celebrates the range of Latinx voices and stories reflecting the diversity of Texas with a play reading festival open to our community.

In 2023, the festival returns to The Gordy for its sixth season with a weekend of play readings, workshops, and celebrations led by Latinx artists and creators. This season’s festival will be held from May 25 through May 28, 2023.

This year, we bring to you a brilliant array of Latinx voices, some near and some far - in the hopes that you are both entertained and informed about what the Latinx community looks like. Enjoy the worlds created here.

Stages takes great pride in hosting el Premio Puente (the Bridge Award) as part of the festival. The Premio Puente was created in order to recognize the exceptional contributions of leaders in the Houston area Latinx arts community. Every year, the organizing body known as the Sin Muros Taskforce takes time to select an individual or organization who has demonstrated great skill/talent/drive/care in serving the Latinx art community in the Houston area. Recipients are celebrated during the festival and are honored with a one of a kind award created just for them by renowned artist Joseph Blanchard. 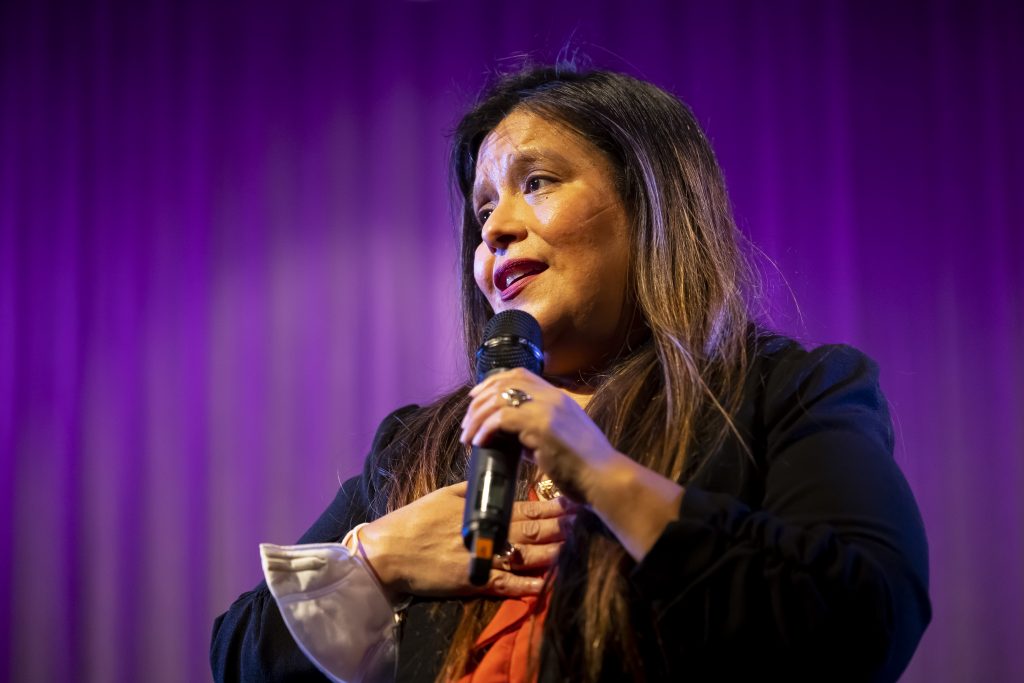 Originally from Houston Texas, Ruby Rivera was raised in the humble setting of Houston’s Northside community. Born of Puerto Rican and Guatemalan descent, she was the first one in her family to get accepted and attend a four year university. Ruby attended and graduated from The University of Texas at Austin. Upon completion, Ruby worked for The University of Texas at Austin in both the financial aid and admissions offices, respectively. Ruby’s time in this setting helped shape her personal commitment to increasing minority enrollment at colleges and universities. It was this particular position that landed her a job back in Houston, Texas at the end of 1999. It was then that Ruby attended her first salsa club in Houston. Ruby immersed herself in the Houston salsa community in order to increase her ability and create her own style. She was quickly noticed and asked in May, 2001 to join the first dance company in Houston, Guaguanco Dance Company. As a member of Guaguanco she learned to choreograph, perform, but most importantly she learned the art of instruction. In 2002, Ruby took a risk and co-founded her own dance company, Rhumba Y Bongo. It was through this dance company that Ruby was able to expand her creativity and work with a diverse group of dancers. Rhumba Y Bongo Dance Company better known as R&B would eventually break the mold of traditional salsa routines by incorporating hip hop, modern, and break dancing and fuse it with salsa and mambo. R&B has been able to perform in multiple events throughout Houston and across Texas. In addition, R&B has been able to travel outside of Texas as invitees and performers in the Chicago, Puerto Rico, and New York Congresses. As an instructor, her patience and passion for teaching has led her to be one of Houston’s top instructors. Ruby has had the privilege to instruct at such Houston events as LULAC Scholarship Fundraiser, and The National Hispanic Forum, along with schools in the Houston Independent School District intermixed with a variety of Houston Social clubs. It is Ruby’s desire to share with individuals the beautiful gift of dancing as it was once given to her. In 2005, Ruby took all her knowledge and connections and became the first female host/organizer for a Salsa Congress, a conference assembly for dancers from across many regions where participants learn skills in dance workshops and performances over a series of days. Rivera has made Houston home to the TEXAS SALSA CONGRESS for 15 years. To date, Ruby is the ONLY female organizer in the Salsa community. When not curating and organizing the TEXAS SALSA CONGRESS, Ruby serves as Manager of College Counseling for the Houston Independent School District, overseeing all HISD Secondary College Career Counseling with a focus on undocumented students, POC and arts student populations. Ruby hopes to inspire others to continue to teach and learn from the art of salsa. Ruby hopes to eventually work with younger age groups to help them not only learn salsa but influence them to attend and obtain a higher education.

Sin Muros: A Borderless Teatro Festival is a community collaborative effort. The taskforce is made up of activists, educators, artistas, grassroots organizers, PhDs, compadres y comadres. Stages looks to their direction and voice to help mold what the festival will look like year after year.